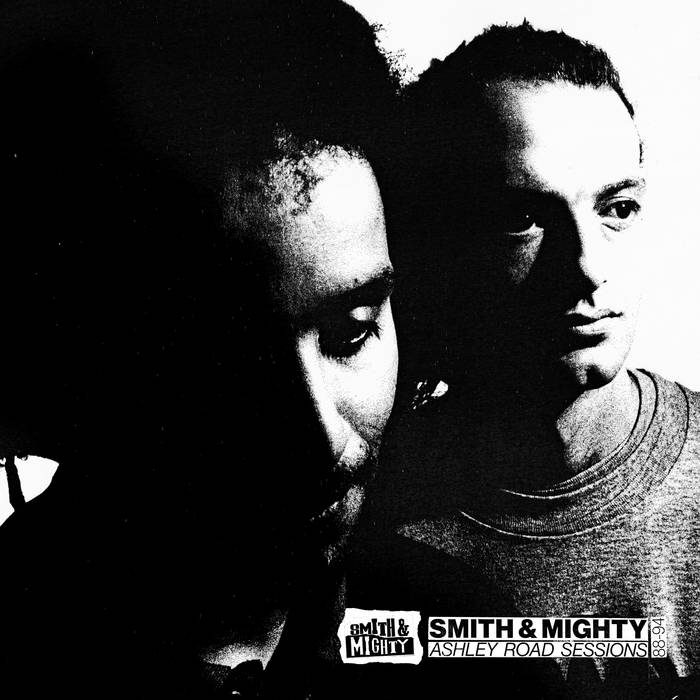 JonnyH179 great collection of tunes here, shame there was not more info on each track, like year made etc. Favorite track: Latent Energy.

“Inventing Massive Attack, Soul II Soul, Tricky, Portishead, Bjork, Mo’Wax, trip hop, The Bristol Sound, Roni Size and just about every British dance record since 1988 that has attempted to meld dub, ambient and hip-hop beats. Ladies and gentlemen, give it up for Smith & Mighty.” Garry Mulholland, from 'The 500 Greatest Singles Since Punk and Disco'

“Though most people will think of Massive Attack, Portishead or even Roni Size when asked about Bristol’s influence on UK music in the late 80s and 90s, really none of them have had anywhere near as much of an impact as Smith & Mighty. With a hand in the development of jungle, dubstep and the particular of-Bristol-ness that so defined the aforementioned artists, their influence is comparable to that of the city itself.” Crack
“Smith & Mighty are producers and originators. From 1985 onwards they took lovers rock, mixed it with heavier modern beats and came up with a new sound. All you needed was the drums, the voice and that spatial dub awareness to create something special.” Test Pressing
Celebrating 30 years since their first release, on November 9th foundation laying forefathers Smith & Mighty release ‘Ashley Road Sessions’. This special one-off double label partnership between Pinch’s Tectonic and Peverelist’s Punch Drunk is an endeavour in homage to their Bristol neighbours, whom they both hold in high regard.
"Smith & Mighty are true pioneers in music whom I've found deeply inspirational on many levels. Tracks like 'Closer', 'U Dub' and 'Same' are some of my all-time favourites. To be putting out these unreleased gems is such an exciting project for both me and Tom. We both took a great deal of influence from Smith & Mighty – especially from 'Bass Is Maternal' – the album and era from which most of this compilation’s source material originates." Pinch
It’s irrefutable and well documented that Smith & Mighty are integral to the story of Bristol music, but the duo (and occasional trio) are accountable not only as key proponents of that local sound, but also for propagating the wider array of much urban and electronic music, to this day.
Despite being inextricably linked to the South West England sound, ‘Ashley Road Sessions’ proffers an array of styles, the breadth and spectrum of which might surprise. Breakbeat, hardcore, balearica and acid house all feature as prominently as the dub, reggae, hip hop beats and soul for which they’re most commonly associated. “Smith & Mighty’s lack of genre tribalism and melting pot approach certainly influenced how I make music”, comments Peverelist.
Especially timely in light of the recent breakbeat and jungle revival, this important document feels both historical and relevant, with the classic hip hop sample, crisp breakbeats and Gat Décor bass of perky opener ‘Always Be There (Step Up)’ sounding remarkably current.
Airborne dub fx float around heavy beats on the sparse pulse of ‘Stalagnate’, which wouldn’t seem out of place on Bokeh Versions, sounding both vintage and very now.
The aptly titled ‘Morning Light’ surely soundtracked the end of long orbital rave nights, straddling funky hardcore breaks, emotive melody, sub bass and heartening Balearic optimism.
The deft break chopping of ‘Film Score’ shows they could do deep jungle as well as anyone, contrasting with ‘Higher Than Tempo’ – a cerebral slow IDM trance dance, that was post ‘E2 E4’ and pre ‘Landcruising’.
‘Dub Song’ seamlessly blends hardcore, jungle and steppers with a smooth liquidity, whilst frenetic sixteenths, hard snares and purring bass drive the skeletal head-snapper ‘Through A Dark Cloud’.
Percussion and drum machines meet melodic chords on ‘Leaving Pt 1 & 2’, which exemplifies the plaintive, melancholy British bass, later made famous by Massive Attack.
As FACT so aptly put it, “with their productions it’s all about the separation of sounds. The sense of size and distance between that massively present bass and the far distant subliminal instrumentation gives a sense of immersion, plunging you into an opiated dream of future cities.”


History:
Bristol in the early eighties had both strong punk and reggae/soundsystem scenes, which birthed The Pop Group and later Rip Rig & Panic.
One of the city's underground hangouts was the infamous Dug Out club, where DJs like Daddy G and Manfred from Def Con played soul, funk, post punk, reggae and eventually electro and hip hop.
In those days, Rob Smith was playing guitar in a local reggae band, while Ray Mighty belonged to the Three Stripe Soundsystem.
They eventually met musically whilst in another local band named Sweat, where they discovered a mutual punk/DIY ethic and interest in linking beat machines, synths and sequencers together, which was relatively new at the time.
When Sweat eventually split, the pair got together, built a studio in Ray's flat on Ashley Road in St Paul's and started a label called 3 Stripe, in order to release their own records. They were not prepared for the interest this would generate.
1987 saw S&M’s first release of sorts, whereby their version of ‘Gymnopedies’ by Erik Satie had vocals added by Mark Stewart (& The Mafia), who released it as his 12” ‘This Is Stranger Than Love’.
In 1987 Jackie Jackson visited Ashley Road, voicing ‘Anyone Who Had A Heart’ and ‘Walk On By’; two sixties hits made famous by Dionne Warwick. By the following year Rob & Ray had worked the first of these recordings into a downtempo sound which blended dub, reggae, hip hop beats and even samples of the original track. After an introduction by Grant (Daddy G) to Lloyd at Revolver distribution, the pair released their first four track 12” 'Anyone' in 1988. The EP was to stay at the top of the indie chart for weeks. Smith & Mighty were up and running.
1988 saw the duo release a further 3 12” singles on 3 Stripe Records: R+R ‘s ‘Acid Off A Way PT1&2’, ‘Walk On’ (their second with Jackie Jackson) and ‘Clash Of The Beats’ featuring M.C. Kelz. That year also saw S&M mix and produce Massive Attack's first release – ‘Any Love’ – featuring Daddy Gee and Carlton.
In 1989 Smith & Mighty continued working their mixing and production magic with top 10 chart hit ‘Wishing On A Star’ by Fresh 4 Featuring Lizz. E (an act that included future D&B stars Krust and Suv), plus remixes of Neneh Cherry’s worldwide smash ‘Manchild’.
They also signed to major label London records offshoot FFRR in ‘89, who in 1990 released the S&M-produced album ‘The Call Is Strong' by Carlton. The album 'stiffed', but was later cited by critics as an unsung British soul gem.
'Steppers Delight EP’, which featured the proto jungle track 'Killa' was released in 1992, then in 1994 they were dropped by FFRR, who didn’t understand what the duo were about, expecting ‘hits’, in typical major fashion. This may have been a blessing in disguise, as the “compromised” album they were coerced into delivering was permanently shelved.
Bruised and confused but bouncing back, they returned to the independent underground and formed More Rockers Records in 1995. They went back to the studio, salvaged some of the cooler elements from the failed deal and made a completely fresh and much more representative album – the now classic 'Bass Is Maternal' – released in 1998.
Interest in their sound picked up again almost immediately and they were invited to record a mix for the 'DJ Kicks' series on !K7. This new relationship proved fruitful and a 3 album deal was signed.
After the success of new album 'Big World, Small World' in 1999 and extensive world touring, ‘Bass is Maternal’ was reissued by !K7 with a much bigger release campaign. A difficult third album released in 2002 was met with mixed response.
Rob Smith went on to release albums with Grand Central Records and Japanese labels Rush and Zetai Mu. Then one day whilst shopping in Bristol’s Rooted Records, he had a conversation with Tom Ford AKA Peverelist, which led to a 12" release on Tom's Punch Drunk label, under the name RSD (Rob Smith Dub). This was the first in a string of 'dubstep' releases, that quickly attained classic status within the burgeoning and world-recognized Bristol scene.

Punch Drunk is a Bristol based label run by Peverelist. Launched in 2006 as a showcase for Bristol artists, it has since evolved into one of the most open-minded & forward thinking contemporary UK electronic music labels, a considerable achievement considering it's resolution to release music only from artists directly linked to the relatively small local music scene. ... more